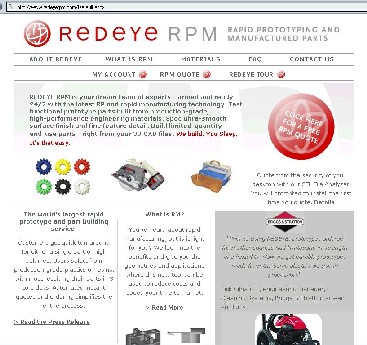 RedEyeRPM.com is an online extension of Stratasys' existing BuildFDM service, which builds prototypes and parts using the FDM process for customers in North America. RedEye augments this existing service by allowing automated, instant quoting and ordering around the clock, seven days a week.

Stratasys is based in Minneapolis, USA. It manufactures for use by OEMs such as aerospace, automotive, defense, medical, and consumer product makers. In 2004 the company installed 36 percent of all such systems sold worldwide. Stratasys patented the rapid prototyping process known as fused deposition modeling (FDM(R)). The process creates functional models directly from any 3D CAD program using ABS plastic, polycarbonate, PPSF or other materials.

RedEye employs a proprietary, secure quoting-and-ordering engine. Stratasys addresses issues of intellectual property in the way that RedEye is deployed. The quoting-and-ordering engine preserves user confidentiality by analyzing design-file data without uploading it. Users are assured that neither the web engine nor RedEye personnel will view their design file until the quote is accepted or saved.

Site visitors receive an automated price quote in about 30 seconds. They need only to log-in, browse to select their file, and choose a build material. When an order is placed, RedEye provides quick turnaround for either a single part or high volumes, with most customers receiving their order in 3 to 5 days.

"Prior to using RedEye, prototypes ordered from other sources had limitations in strength and flexibility," says beta customer Rick Gilpatrick, engineering manager, Cleaning Systems, Briggs & Stratton Power Products. "Now we get durable prototypes made from the same plastics we use in production."

"Stratasys is offering unparalleled FDM capacity," says industry consultant Terry Wohlers, president of Wohlers Associates, Inc. "I was impressed that the company had produced 60,000 parts for customers over the past three years and now has over 60 machines dedicated to its operation. With this initiative, Stratasys is targeting a services sector estimated at $213 million." Wohlers Associates has provided services for Stratasys.

"We've become an extension of many of our customers' in-house production capabilities as well as a fulfillment partner for many service bureaus," says RedEye director of RPM services Eric Lindberg. "We will be introducing an offer to partner with existing service bureaus to allow them to bid on larger FDM jobs than they otherwise could." He also says that RedEye has the ability to deliver as a tusted source that can handle part development and production needs regardless of the volume.